When you cut Ashitaba’s leaf or stem, you will see sticky yellow sap. This yellow sap is very precious as only a few milligrams can be collected at once from the cut surface of the stem. Ashitaba polyphenol is concentrated in the yellow sap and its main component is more than 10 types of “Chalcone”.

The two types of polyphenols named Xanthoangelol and 4-Hydroxyderricin are especially rich in yellow sap and the functionality of these yellow sap has received much attention. 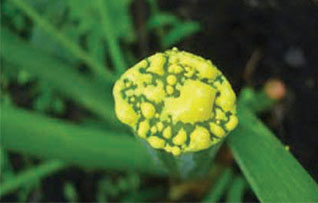 In the randomised, double-blind, parallel group study, 26 slightly obese male and female participants with BMI between 25 and 30 took 200 mg day of Ashitaba chalcone as an active ingredient after dinner for 8 weeks.